For this duel, the Middle Empire is in the spotlight. Sold at very similar prices, the Xiaomi Mi Handheld Vacuum Cleaner and Dreame V9 Pro got an identical rating; we did not need to oppose it any more in a duel. 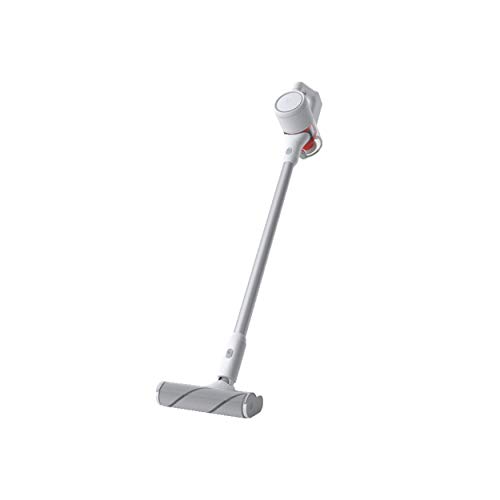 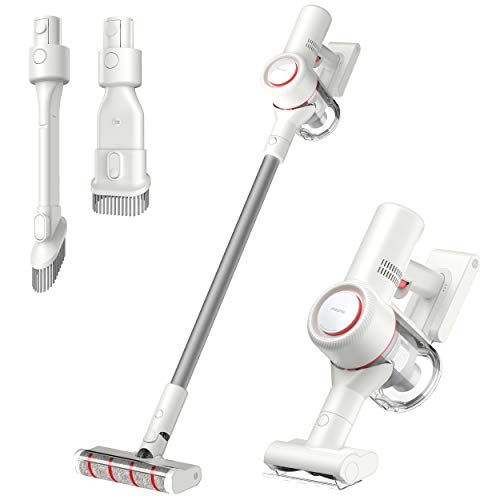 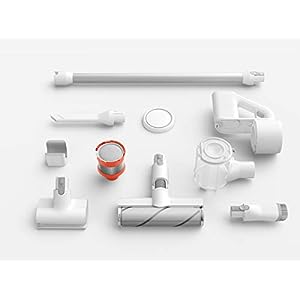 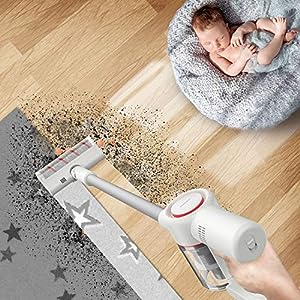 Convenience of use: Dreame V9 Pro

The Dreame V9 Pro and the Mi Handheld Vacuum Cleaner are two format stick vacuums stick. The engine block, the filtration system and the collector (which constitute the center of gravity) are placed near the user’s wrist. It is thus possible to orient the vacuum cleaner in all directions, whether or not equipped with its suction tube and a few accessories in order to vacuum up or in inaccessible corners. However, this type of device requires a wall base to be stored properly. That of the Mi Handheld has nothing to envy facing the station of the Dreame V9 Pro. The first receives a male plug which plugs into the device automatically when it is placed there. The second relies on a system of electrical connectors. These two systems are as practical as the other.

In floor suction or handheld vacuum mode, the weights of the Mi Handheld (2.52 kg and 1.57 kg) and that of the Dreame V9 Pro (2.5 kg and 1.66 kg) are very similar. Better, they are light enough not to weigh on the arm even if the cleaning session is prolonged; it is not this criterion which will decide them.

On the other hand, thanks to its three suction levels, the Dreame V9 Pro is a little more versatile than the Mi Handheld which has only two powers. Both have a trigger which must be kept pressed so that the suction does not stop. If this can tire the index in the long run, this method especially allows to extend the autonomy of the vacuum cleaner since it is not necessary to stop it when it is necessary to move a piece of furniture, for example. But neither embeds a trigger blocking system like that of the Hoover H-Free; pity !

Still on the subject of autonomy, the Mi Handheld Vacuum Cleaner indicates the remaining battery level thanks to a simple LED flashing in red when the suction will soon stop. With its three LEDs, the Dreame V9 pro is barely more precise. We are very far from a model like the Roborock H6 which gives an indication of the remaining useful life to the nearest second.

Besides, these two stick vacuums do not bother with frills (sometimes very useful). For example, they do not have a LED strip on the suction head – which allows you to spot litter on dark floors or under furniture. We also forget the removable battery, or the ease of storage offered by the H-Free or the Electrolux PureF9 Allergy since it is not possible to place them in the parking position. The intelligent brushes that adapt the suction power to the type of soil are also absent. Without being basic, the Mi Handheld Vacuum Cleaner like the Dreame V9 Pro should not make the fairies of the house shiver geeks.

Both the Dreame and the Mi are well supplied with accessories; they are delivered with a long nozzle, a flat nozzle and a motorized mini-brush.

Thanks to its higher suction powers, the Dreame V9 Pro wins the first round.

It must be believed that the long pile carpets are few in China. In fact, neither of our two vacuum cleaners has a brush other than the soft roller, very effective on hard floors and fine carpets, but generally much less on thick carpet. Indeed, on a standard brush, the bristles, often made of nylon, are longer and stiffer than soft textiles and they beat the carpets to extract the detritus before their aspiration.

Without an appropriate brush, the pile rugs therefore offer fierce resistance to the Mi Handheld Vacuum Cleaner which picks up 73% of the waste in 2 minutes of intensive use. And yet, the Dreame V9 Pro does even worse with only 57% efficiency under the same conditions, ranking it among the lowest performing models in this exercise.

Fortunately, things improve greatly on fine carpet since this time, it only takes a minute for the Dreame V9 Pro and the Mi Handheld Vacuum Cleaner to harvest all the grains of rice, whatever the power level chosen. The performances of our two competitors with intermediate powers are also very similar and do not allow one to favor one more than the other.

On hard ground, the Mi Handheld Vacuum Cleaner is a little more efficient than the Dreame by picking up 100% of waste in 30 seconds at the lowest suction power. The latter still sucks 99% of our Review rice grains in 30 seconds at maximum power (96% at intermediate power and 94% at lowest power).

The Dreame and Mi have a very similar waste bin emptying system. On the wall of the collector, at the front, a button is used to rotate the bottom of the tank. This frees up the dust that falls into the bin. This method prevents the user from getting their hands dirty with dirt after the operation.

Another similarity, the filtration of the Mi Handheld Vacuum Cleaner, like that of the Dreame V9 Pro, is impeccable. After our cocoa Review (which consists of sucking 20 grams of chocolate powder), the HEPA filters of the two devices took no weight. This means that the fine dust is well directed towards the collector and is contained there; they will not seep into every corner of the device, or worse, be thrown outside.

Still in the similarities, we can extract the rotary brush from the Dreame V9 Pro as easily as that from the Mi Handheld Vacuum Cleaner and, which does not spoil anything, no need for a tool to carry out the operation, in a case as in the ‘other.

However, it is impossible to completely disassemble the Dreame V9 Pro; the manifold cannot be separated from the engine block, as the Mi Handheld Vacuum Cleaner allows. Of course, the filters can still be removed for in-depth maintenance, but it will take a little more effort to clean the Dreame.

Thanks to this, the Mi Handheld Vacuum Cleaner takes the advantage.

Launched at minimum suction power, the Mi Handheld Vacuum Cleaner vacuums for 28 min 30 s and 8 min 30 s in intensive mode. It is ultimately quite little compared to the other models in our comparison and the Dreame does not fare much better. Indeed, it runs out of breath after 25 min 30 s at the intermediate power level and only 7 min 50 s in boost mode. You must use the lower suction power to hope to do the cleaning a little longer (40 min 40 s).

This last possibility allows him to equalize by winning a second point.

The last point goes to the Mi Handheld Vacuum Cleaner.

After a hard-fought duel, it is very difficult to decide in favor of the Mi Handheld Vacuum Cleaner or the Dreame V9 Pro. However, the first is more effective on long pile carpets, but also easier to clean and also more discreet. He therefore won this confrontation against the Dreame V9 Pro, which is also an excellent performance / price ratio.

Microsoft Band arrives in the UK