The technology of eye tracking or oculometry is more and more widespread. It lets you know where you are looking and how your pupils and irises react for various purposes. It does not require particularly complex technology; an HD video camera capable of observing your face is sufficient to collect the data.

But according to a study in 2021, this data obtained from eye tracking can reveal an extraordinary amount of information about you when analyzed by advanced data analysis systems.

Eye tracking tells you all about you!

“Our review of the literature shows that eye tracking data may implicitly contain information. Information on biometric identity, gender, age, ethnicity, body weight; as well as the personality traits, drug use patterns, emotional state, skills and abilities, fears, interests and sexual preferences of a user. “

That’s not all ! “Some eye tracking measurements can even reveal specific cognitive processes. They can be used to diagnose various physical and mental health conditions. “

According to Grandview Research, “The analyzed data is used to study a myriad of psychiatric and neurological conditions. Such as Autism Spectrum Disorder (ASD), Attention Deficit Hyperactivity Disorder (ADHD) or Obsessive Compulsive Disorder (OCD); as well as Parkinson’s disease, Alzheimer’s disease and schizophrenia, among others. “

What items are analyzed by eye tracking technology

What exactly are they looking at? Yes, eye tracking systems can see which direction your eyes are pointing to infer what you are looking at. But this is far from the end of the story. They can also track duration of fixations, rapid eye movements between fixations, fluid pursuit movements and elements; such as the acceleration and maximum speed of your eye movements.

They can analyze your eyelids, observing how open your eyes are, how often you blink and how long your eyes stay closed when you blink. They can take note of the redness and see how watery or dry your eyes are from the highlights.

Also, they can measure the dilation of your pupils. A famous clue to sexual interest or arousal. But also linked to drug use, fear and certain types of brain damage. They can note the color of your eyes and the texture of your iris.

They may also note your facial expressions, the movements of your eyebrows, the number and depth of wrinkles around your eyes, the shape of your eyes and the color of your skin.

It is not for nothing that we speak of the eyes as “windows to the soul”. They can tell us a lot about the person we interact with. And, through evolution and pattern recognition, we all learn to glean a lot of information about people through their eyes. 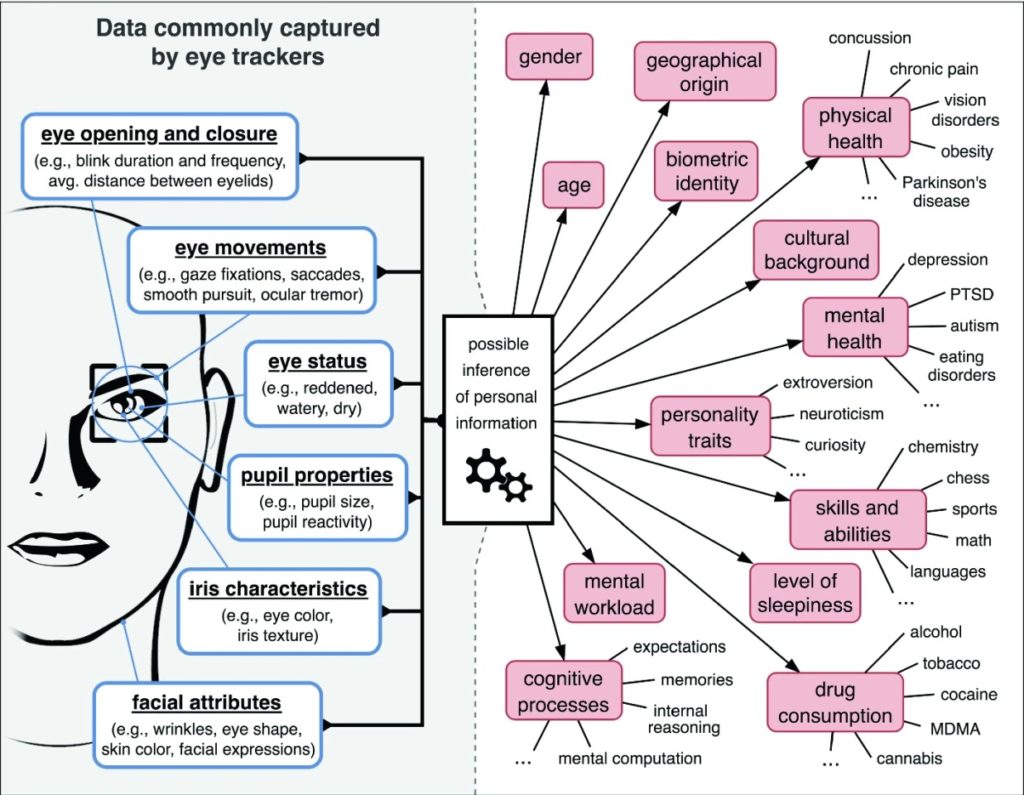 Biometric identity can be established using a combination of things. The colors and patterns of your irises can be used almost like a fingerprint. The same goes for the responsiveness of your pupils, the speed of your gaze and the trajectories your eyes take when they follow a moving object; mechanical differences and differences in how the brain works make these elements unique.

Then there is the mental load. An area in which eye tracking is sometimes more efficient than EEG. Pupil dilation can be used to measure the difficulty of a task and mental effort. The rate of eye blinking correlates with dopamine levels. This indicates goal-oriented learning and behavior.

Some of these phenomena may be obvious to a human observer. We can know when someone is thinking, accessing their memories; or be imaginative by observing the eye movements of others. But much of this phenomenon involves the weirdly opaque world of AI and deep learning.

The way our eyes move in day to day life turns out to be a surprisingly strong predictor of our personality when sifted through these machine learning algorithms. A fascinating study found that it was possible to reliably predict a subject’s score range for four of the “big five” personality traits; neuroticism, extraversion, agreeableness, awareness, as well as curiosity. Others have been able to identify your phobias, mating preferences, interests, and areas of expertise.

The list is still long. But you get the idea: under the right circumstances, any device that can closely observe your eyes can learn a bewildering amount of information about you. And while you can deliberately choose where you look, to some extent there are other things you can’t help but reveal.

To alleviate these concerns, the researchers point out that many eye cues can have confusing or conflicting meanings; and that most of the public research to date has been done in the laboratory, where it is inexpensive and well controlled, rather than in the chaos of the real world.

Eye tracking is a gold mine for manufacturers

On the other hand, this study only covers research accessible to the public; “One can reasonably assume,” write the study’s authors. “Some of the companies with access to consumer device eye tracking data (eg, device manufacturers, ecosystem providers) have larger sets of training data; as well as greater technical expertise and more financial resources than the researchers cited in this article. Facebook, for example, pioneered virtual reality and eye-tracking technology. It is also one of the richest and most profitable companies in the world; with a multi-billion dollar research and development budget and a user base of over 2.3 billion people. “

The advantages of this type of eye tracking technology are clear; especially when combined with virtual reality or augmented reality technology. Devices and apps can become extremely personalized and tailored to your current condition and interests. This technology offers marketers extraordinary possibilities to target you; not only with the right products, but also with the right approaches, the right messengers, and the right time to make you as responsive as possible.

It is unlikely that companies willfully refrain from using or selling personal information. Data that can be extracted from data already collected. Also, strong regulatory incentives and controls should be put in place.

And of course, with so much real-time feedback from eye tracking, the chances of monitoring, manipulating, and coercing you will be higher than ever. The consequences for privacy will be much worse than if the whole world saw your Internet history.

In order to preserve the benefits while minimizing the risks, the researchers suggest measures such as keeping raw data only for temporary use on the device itself; and their delivery to application and device makers in aggregated and pre-computed forms or with random statistical noise added to “scramble” the data.

But as these data fit into a larger context. A context where we can be compromised by advanced analysis of all kinds of data flows collected about us 24/7. Governments will need to get ahead of privacy. “Since it is unlikely, the authors say, that companies willfully refrain from using or selling personal information that can be extracted from data already collected, there should be strong incentives and regulatory controls. “

There is certainly food for thought. Particularly as we move towards the magical convenience of nervous augmented reality; and that Facebook pushes the development of hyperrealistic VR avatars. Avatars that allow people to express themselves with ever more comprehensive ranges of facial and body language indices.

The Complete Eye Tracking Study – What Does Your Gaze Reveal About You? On the Privacy Implications of Eye Tracking – is available for free at Springer Link.